Go to the lab and your mind can be read 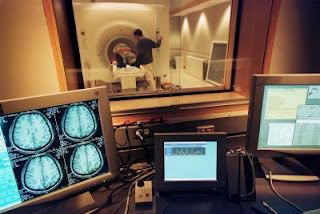 Science is what scientists do. But what scientists really do, only partly appears in their scientific publications. In the publications we read what went well, not what went wrong; we read the results, not the struggle to find the results. When I was doing science myself – as a PhD-student in physics – I have seen colleagues struggling four or five years building an experiment and getting it to work. When the experiment finally worked, the data were sometimes collected in a month. From their scientific publications you would guess that the research had gone smoothly and logically, but the reality had been the opposite.

Science is a process, not even a logical process, but an irregular one. To understand that process, science journalists should regularly go out and see science in action: in the lab, at the accelerator, to the Arctic, on a volcano, or wherever. We can not fully understand science from scientific publications alone.

As I have reported regularly about brain scan experiments, I finally wanted to be part of such an experiment myself. Not just for fun, but as a subject in a scientific study. Last Thursday I was for an hour lying in an fMRI-scanner at Maastricht University in the Netherlands. With a three-tesla magnetic field my brain was being scanned and my mind being read.

The final aim of the researchers is to let ‘locked-in’-patients communicate with their family and friends. ‘Locked-in’-patients are suffering from a stroke or an illness so that they can not move, they cannot speak, they cannot even blink with their eyes. But they are conscious, as we know from those who luckily managed to recover. They can hear what others are telling but they cannot react in any way. German Karl-Heinz Pantke was one of the lucky ones who recovered and he wrote his striking experiences in the book Locked-in – Gefangen im eigenen Körper. These patients would be helped enormously if their minds could be read.

Researchers from the Maastricht Brain Imaging Centre now invented a way to indirectly read the letters the patient produces in his mind. For example, when I was in the scanner, we had defined that the letter D stood for telling in my mind the Shakespeare-quote ‘To be or not to be, that’s the question’, and that A stood for mentally drawing a house. I produced seven letters by different cognitive tasks, and the researchers reconstructed all the letters correctly from the scans, of course not knowing which letters I wanted to produce. The principle works and they read my mind. And I will be one of the six subjects on whose experimental results the scientific publication will be based.

Sure, it’s very cool to lie in the scanner, have your mind scanned and after the experiment see your own brain inside out on a high resolution scan. But it also gave me much more insight in the scientific process. I saw the clever way in which they had devised the experiment, but I also noticed little things that went wrong. When I had not understood a certain task, I started to analyze my own mistake. This messed up that part of the experiment, because I couldn’t concentrate well anymore on the cognitive tasks I had to do.

I know, going out there to watch science in action takes time, and time is money, but it is an essential part of science journalism. I am afraid that with the growing commercial pressure on journalism, there will be even less journalists than today that will take the time and the effort to go to the lab. But without that effort our job will lose a lot of meaning. As it is said: one dead person is a tragedy, a thousand dead ones is statistics. Science is more than telling the statistics. To show this, we have to go out there and report science in action.
Internet
Maastricht Brain Imaging Centre: http://mbic.unimaas.nl/
Posted by Bennie Mols at 3:08 PM