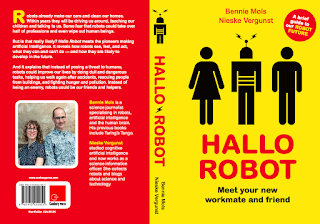 Canbury Press just published the book "Hallo Robot: Meet Your New Workmate and Friend" that I wrote together with Nieske Vergunst. It's the English translation of the book that was published last year in Dutch.

Some fear that robots could take half of our jobs and even wipe us out. But is that really so? Hallo Robot reveals how robots see, feel, and act — and what tasks they are likely to perform in the future.

Instead of posing a threat to human beings, intelligent machines could transform our lives. Robots already make our cars and clean our homes and could soon chauffeur us, teach our children, and keep our parents company in old age.

While tackling ethical concerns head-on, Bennie Mols and Nieske Vergunst show how artificial intelligence could help the lame walk again and rescue survivors from collapsed buildings — and boost the global fight against hunger and pollution.

Welcome to a realistic, colourful view of our fast-approaching robot future.

Take a look inside the book:


You can buy the book at your local book store or via Bol.com or Amazon.com.

See here for media attention for the Dutch version. 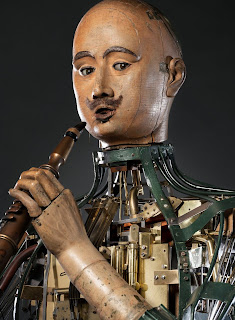 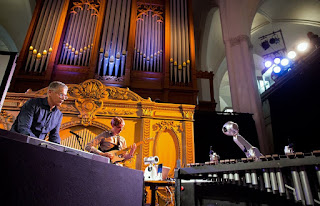 We need more realism in communicating AI and robotics

In 1965 AI-pioneer Herbert Simon predicted that “machines will be capable, within 20 years, of doing any work a man can do.” It was one of the first overpromises of AI and robots, but by far not the last.

In 2011 the IBM supercomputer Watson stunned the world by winning the tv-quiz Jeopardy, beating the two best humans of all times with a large margin. Ken Jennings, one of the two defeated humans, famously said at the end of the quiz: “I, for one, welcome our new computer overlords.” In the years that followed IBM cleverly developed the vision of revolutionising health care by using a retrained Watson to assist human doctors in making improved medical diagnoses.

The chances are high that in the long run AI really is going to improve healthcare in the way IBM envisions. However, it’s one thing to develop AI that works well on an academic lab scale. It’s a very different thing to transform that same system into a something that works well in the messy, everyday world. We see this also with the self-driving car. The self-driving car still has to overcome some unsolved fundamental problems before it can really drive us without any human intervention from A to B: driving in all types of weather, understanding what it sees in a wider context, communicating with other vehicles in order to predict their behaviour, to name a few remaining challenges.

In the everyday world, data that feed into an AI-system are often messy and biased. AI-systems also lack a lot of common sense that humans have. They can be fooled in very different ways than humans. And once a company implements an AI-system into its everyday working processes, the dynamics inside the organisation changes and new inefficiencies might arise. A surgical robot not only changes the work of the human surgeon, who does not stand any longer next to the patient. The surgical robot also changes the work of the assistants that still do stand next to the patient at the operating table. Suddenly they need some new skills to deal with the robot.

Given AI’s long history in over-promising and under-delivering − especially in the 60’s and 80’s − it would be much better for AI-developers to promise less and deliver more. Better for citizens and consumers, better for politicians and policy-makers. We should listen less to futurists that promise us a utopian future, less as well to the doom thinkers that predict that intelligent machines will take over the world. Both views are equally improbable. AI is a kind of laser-intelligence: very powerful, but in a very narrow area. By comparison, human intelligence is more like a classical light bulb: not as powerful as a laser, but illuminating a much larger area.

In communicating about AI and robots we need a lot more realism. And that’s the reason that I decided to write the book Hallo Robot − Meet Your New Workmate and Friend, together with my colleague Nieske Vergunst. The book is published this week.

For the book we interviewed the scientists and engineers who design and build robots, but also the psychologists who study the interactions between humans and robots, and the economists who work on the impact of automation on the labour market. We asked for input from professionals who use robots on a daily basis, and we spoke with people outside the field of professional robotics: from an amateur robotics enthusiast to a comedian who is fascinated by robots. Through their stories, we hope to find out how the robot works, what it can do well, what it can’t yet do, what we can expect in the near future, and how humans can use robots to make their lives better.

Humans have a lot of cognitive and physical limitations, and we can live better lives if we find clever ways to overcome these limitations. So, the most important question about AI and robots for the next decades is how humans and machines can work side by side in such a way that they perform better together than humans or machines can do alone. Even a very smart machine is still designed, built, programmed and maintained by humans. You can’t get the human out of the machine, so the responsibility rests on us.
Posted by Bennie Mols at 9:12 PM