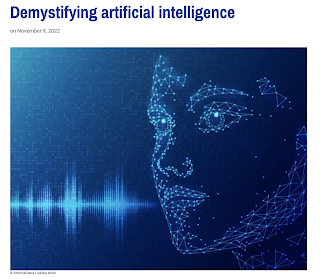 This article was published on the website of the European Science-Media Hub on 9 November 2022
‘AI is about algorithms’, said a computer scientist. ‘AI is about machines that can learn from data’, said an engineer. ‘We need to do something with AI’, said a business manager. ‘AI is an existential threat for humanity’, said a sociology student.

Over the past decade, artificial intelligence has become branded as AI, but does everyone mean the same when they speak about AI? Not really. “A babylonian confusion of tongues has arisen”, says Geertrui Mieke De Ketelaere, Adjunct Professor at Vlerick Business School in Ghent, Belgium.

Geertrui Mieke De Ketelaere: I started working in the field of artificial intelligence when it was just an academic discipline, in the early 1990’s. A decade or so later, businesses started to be interested in AI, and they started to use their own language, stating things like ‘data is the new oil’. Later, some ten years ago or so, governments stepped in and started using their own language around rules, laws and ethics. And now, scientists, technologists, business managers, sociologists and lawyers are sitting around the table, talking about AI, and they don’t understand each other any longer.

So, what should be done?

Geertrui Mieke De Ketelaere: We urgently need ‘AI translators’, people who translate the needs and demands of engineers to managers, or the concerns of citizens to developers. We need people who can talk about all aspects of AI, people who can connect people, planet and profit – the social, environmental and economical domains. We should adopt AI when it has clear added value, but not when it doesn’t.
Read the full article here.
Posted by Bennie Mols at 10:02 PM 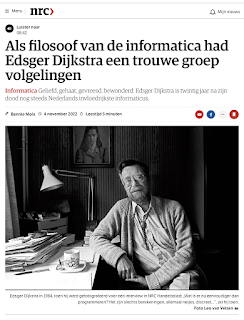 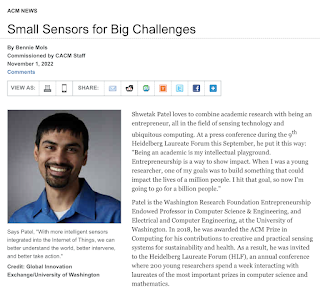 I wrote this story for the Communications of the ACM and it was published on 1 November, 2022

Shwetak Patel loves to combine academic research with being an entrepreneur, all in the field of sensing technology and ubiquitous computing. At a press conference during the 9thHeidelberg Laureate Forum this September, he put it this way: "Being an academic is my intellectual playground. Entrepreneurship is a way to show impact. When I was a young researcher, one of my goals was to build something that could impact the lives of a million people. I hit that goal, so now I'm going to go for a billion people."

Patel is the Washington Research Foundation Entrepreneurship Endowed Professor in Computer Science & Engineering, and Electrical and Computer Engineering, at the University of Washington. In 2018, he was awarded the ACM Prize in Computing for his contributions to creative and practical sensing systems for sustainability and health. As a result, he was invited to the Heidelberg Laureate Forum (HLF), an annual conference where 200 young researchers spend a week interacting with laureates of the most important prizes in computer science and mathematics.
The full story can be read on the website of the Communications of the ACM
Posted by Bennie Mols at 3:30 PM