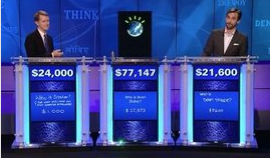 In a three day match, IBM's supercomputer Watson has beaten the two best human players in the history of America's most popular tv-quiz Jeopardy.

Watch here part 1 of the third and final match:
http://www.youtube.com/watch?v=l2_fM6e9AiA&feature=youtube_gdata_player

Watch here part 2 of the third and final match:
http://www.youtube.com/watch?v=DHGu0-p-3QQ&feature=youtube_gdata_player

Watson answered very fast, gave a lot of correct answers and some occasional wrong answers. In one case it made a definitely non-human mistake: Brad Rutter first gave a wrong answer. Next, Watson repeated the same wrong answer. No human player would ever have done that. But this is because Watson does not hear what the other players say.

For a computer to win in Jeopardy, is much more difficult than to win in chess, as IBM's supercomputer Deep Blue did in 1997 against world champion Gary Kasparov. Natural language is highly ambiguous, which makes interpretation for a computer difficult. But now IBM has shown that computers are able to do just that.

The scientific research that has led to Watson is much more useful for the world than the research that has led in the 80's and 90's to better than human chess computer. Watson's victory shows that computers are ready to answer questions asked in complicated and often ambiguous natural language.