The Internet has evolved from a read-only Web, via a read/write Web to a social Web in which humans are becoming part of the machine. Dame Wendy Hall, Professor of Computer Science at the University of Southampton, has always been at the forefront of the science that has led to social machines. 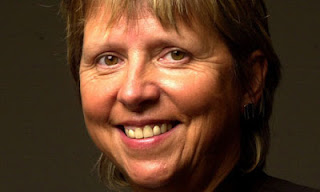 This article has been published in I/O Magazine, december 2012

Dame Wendy Hall is an atypical computer scientist. She doesn’t like programming. She doesn’t like geek speak. She likes dealing with people. ‘I am a people person, whereas an awful lot of computer scientists don’t like dealing with people,’ she says after having delivered her lecture Web Science: The Theory and Practice of Social Machines at ICT.OPEN 2012 in Rotterdam last October.

Web science is a perfect example of the unique interplay between the scientific and the engineering components of computer science: an interplay between fundamental scientific developments and the practical tool created by computer scientists: the Web. And the social machine is to web scientists what the telescope is to astronomers. ‘Social machines collectively use the power of the human brain, together with the power of machines, for the greater good,’ says Hall, adding, ‘although of course there will also be a greater bad.’

As Hall sees it, the main question that social machines can help us answer is how certain phenomena emerge on the Web. ‘A well-known example involves Twitter, a social machine that we use a lot in our scientific research in Southampton. Who influences whom on Twitter? Who are the creative thinkers? Who are the followers? Who amplifies messages? These are interesting questions to answer. Let me give another example of what a social machine can do in the medical domain. In a small country, only a few people might suffer from some rare disease. But on a global scale that can add up to a significant number of people. A social machine can help patients and their families share their knowledge and experiences.’

Explorers
With the others in her research group at the University of Southampton, Hall is working to characterise and classify social machines, but also to build social machines of their own. She aims to develop a Web observatory where people all over the world can share the data they are gathering about the Web. Hall: ‘Astronomers are already sharing data gathered from different places around the world to create more powerful telescopes. Ideally there should be Web observatories all over the world, including the one we are building at Southampton, coordinated through the Web Science Trust, which is hosted at Southampton.

In considering the potential of social machines, we have to remember, Hall says, that we are still in the very early days. ‘We are explorers in new terrain. It’s like with the computer in the 1940s. People still had to discover what computers are and what computer science is. More social machines fail than succeed. But looking at the failures is as important as looking at the successes. Actually, the Web itself is only so young and therefore still fragile. Governments and companies often don’t understand the digital ecosystem. Companies are afraid to be open and some even try to challenge the principle of net neutrality. Sometimes I feel that just as we could destroy the physical ecosystem on the planet, we could also destroy the digital ecosystem.’

Keeping a close eye on both the element of privacy and the terms under which data can be used is an important issue when it comes to collecting data. Another important issue is that many companies are reluctant to share the data they ‘own’. ‘But in the end,’ says Hall, ‘it’s all about return on investment. If the return is higher than the investment, then it’s worth sharing data.’

Role model Now 60, Hall flies all over the world to give talks about web science and the potential of social machines. ‘I feel privileged that I am ending my scientific career on a real high. All that I have done before is coming together in what I am doing now.’ In 2012, Computer Weekly ranked her second among the ‘most influential women in UK IT’. Hall is seen as a role model for women in science. ‘I have accepted that role, although I have never had kids. I’ve never had to combine family with work and in that sense I am not a role model.’

Although Hall likes to study and construct social machines, she is a late adopter herself. ‘I use Twitter, but only since 2009. I enjoy Twitter because it’s a good way to communicate with a large number of people. But I don’t use Facebook. I just don’t want to take the time for it. For me, computer science has always been about how people use computers. I have never been interested in writing programs or compilers. Honestly speaking, computers really annoy me. If I ever have problems with my computer or with the network, I give them to the technical support team to fix.’

Wendy Hall was born in London in 1952. She received a bachelor’s degree and a PhD in mathematics from the University of Southampton. In 1984 she became a computer science lecturer at the same university. She did pioneering research in the field of multimedia and was the co-inventor of the Microcosm hypermedia system, a predecessor of the World Wide Web that ran on a closed network of computers. In 1994 she was appointed Professor of Computer Science at the University of Southampton. In 2006 she co-founded the Web Science Research Initiative (together with, among others, Tim Berners-Lee, the inventor of the World Wide Web). From 2008 to 2010 she was President of the ACM (Association for Computing Machinery). In 2009 she was awarded the title Dame Commander of the British Empire and she was elected as a Fellow of the Royal Society. From 2008-2011 she was a guest professor at Tsinghua University in Beijing. Wendy Hall is married and has no children.