Only five years ago, in 2008, when CERN's Large Hadron Collider started to produce data, we thought of the LHC-data as Big Data.

But already by the end of 2012 the LHC-data have been dwarfed by the data continuously generated by the world community, using telecommunication, Internet and its many social media and business applications. 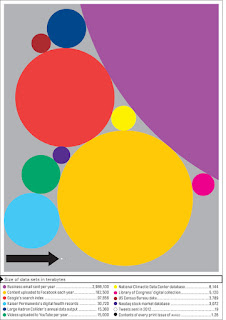 The annual amount of information in business-emails is almost two hundred times the annual LHC-data production.