Using AI to Drill Down in Physics

If a computer can teach itself to play the age-old board game Go better than the human world champion, if a computer can even conjure up a genius new Go move, couldn't a computer also discover new physics? 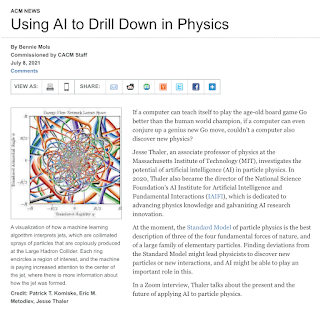 I wrote this story for ACM News and it was published on July 8, 2021

Jesse Thaler, an associate professor of physics at the Massachusetts Institute of Technology (MIT), investigates the potential of artificial intelligence (AI) in particle physics. In 2020, Thaler also became the director of the National Science Foundation's AI Institute for Artificial Intelligence and Fundamental Interactions (IAIFI), which is dedicated to advancing physics knowledge and galvanizing AI research innovation.

At the moment, the Standard Model of particle physics is the best description of three of the four fundamental forces of nature, and of a large family of elementary particles. Finding deviations from the Standard Model might lead physicists to discover new particles or new interactions, and AI might be able to play an important role in this.

In a Zoom interview, Thaler talks about the present and the future of applying AI to particle physics.
Read the full story on the website of the ACM.