There is Plenty of Room at The Top (of Supercomputing) 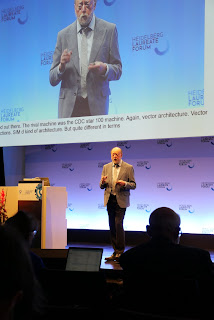 Supercomputers are the Olympic champions of scientific computing. Through numerical simulations, they enrich our understanding of the world, be it stars lightyears away in the universe, the Earth's weather and climate, or the functioning of the human body.

For over four decades, Jack Dongarra has been a driving force in the field of high-performance computing. Earlier this year, Dongarra was awarded the 2021 ACM A.M. Turing Award for "his pioneering contributions to numerical algorithms and libraries that enabled high performance computational software to keep pace with exponential hardware improvements for over four decades."

Writer Bennie Mols met with Dongarra during the 9th Heidelberg Laureate Forum in Germany in September to talk about the present and future of high-performance computing. Dongarra, now 72, has been a University Distinguished Professor at the University of Tennessee (U.S.) and a Distinguished Research Staff Member at the U.S. Department of Energy's Oak Ridge National Laboratory since 1989.

Read the rest of my article on the website of the Communications of the ACM
Posted by Bennie Mols at 6:45 AM