Click on the link above to see a new hit on You Tube...about the biggest science experiment in the world: the Large Hadron Collider. 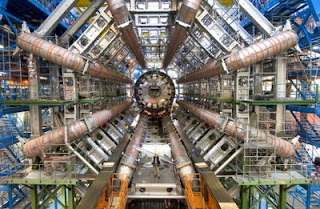 Photo from the building work on the ATLAS-detector in the LHC.

Read my article about the LHC: http://benniemols.blogspot.com/2008/02/de-titanenklus-het-grootste-experiment.html