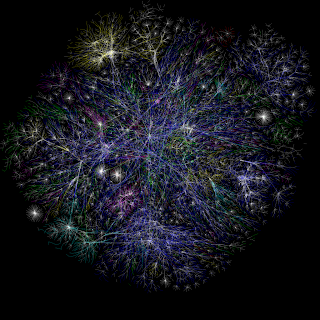 A brief history of the Internet

1969 The first version of the ARPANET, developed by the United States Department of Defense. The ARPANET is the predecessor of our present day Internet.

1971 Ray Tomlinson sends the world's first e-mail between two computers of the ARPANET. He is the first to use the @-sign in an e-mail address.

1983 DARPA (America's Defense Advanced Research Projects Agency) adopts the Transmission Control Protocol/Internet Protocol (TCP/IP) as the standard protocol for communication between computers. The Internet is born on January 1, 1983. It consists of a network of 500 computers at universities and US government institutions.

1990 Birth of the World Wide Web at the CERN-institute in Geneva (Switzerland). The whole world should thank Tim Berners-Lee that his invention was not patented and commercialized, but stayed an open, free infrastructure. Wouldn't he deserve the Nobel Peace Prize for this?

1991 Info.cern.ch is the first website, running on a NeXT-computer at CERN

1992 Website-registration for the Internet begins with domain names ending on .com, .net, .org, .gov and .edu.

1993 CERN opens up the World Wide Web for everyone.

1994 Release of the Netscape Navigator, a browser for the Internet. Creation of JAVA.

1995 Foundation of Yahoo, Amazon.com and eBay.

1997 The Amsterdam Internet Exchange is launched. Amsterdam becomes the Internet capital of the world.

2006 Web Science becomes the scientific study of the Web

2011 Although it is really too much honor to call the Arab Spring a Facebook- or a Twitter-revolution, Facebook and Twitter definitely play an accelerating role in spreading the revolutionary spirit during the Arab Spring.

2013 Internet @30...More than 2,4 billion people worldwide use the Internet. If the Internet were a country, it would rank as the world's fifth-largest economy.

- Our present Internet connects computers and people. The next step will be to also connect THINGS: your car, your fridge, your house. As more and more things are getting sensors and chips, they can be connected to the Internet

- Turning the Internet in a true and beneficial Social Machine that uses Big Data. Read my interview with Dame Wendy Hall about the Social Machine.

Read here more about the history of the Internet.
Visit also the The Big Internet Museum
Internet World Stats collects statistics about the use of Internet in the world