A rat in Brazil cooperates via brain signals that are transmitted via the Internet with a rat in the USA. Spooky action on a distance! 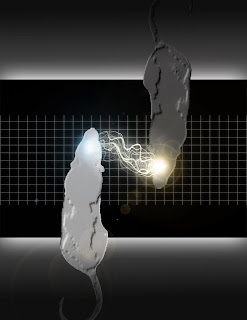 With this experiment, an old Science Fiction-dream has come true: direct brain-to-brain communication. In the science fiction book Donovan's Brain (1942) the millionaire W.H. Donovan gets killed. However, just in time his brain is saved and kept working in a vat. This brain-in-a-vat gets more and more control over the mind of a physician. SF-writer Curt Siodmak lets the brains communicate via telepathy, but professor Miguel Nicolelis has now for the first time succeeded in real, direct brain-to-brain communication.

Watch the video to see and hear dr. Miguel Nicolelis describing the experiment.

My private interview with prof. Nicolelis about his ground breaking work will later be published in the Dutch popular science monthly KIJK.