Can computers be creative?

I am invited to give a lecture about the question "Can computers be creative?" during the LIFT-conference 2016 in Geneva (10-12 February).

BBC News calls the LIFT-conference "one of the highlights of the technophile calendar". 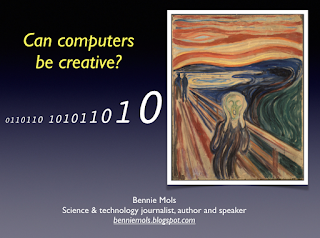 “Logic brings you from A to B, but imagination brings you everywhere” - Albert Einstein

Because creativity is such a vaguely defined term, the question whether computers can be creative is a philosophical rather than a scientific question. Defining creativity in a narrow way, some computers are already creative. However, if we define creativity as human creativity, in a way exhibited for example by Einstein, Picasso or Kafka, computers have some fundamental problems. In my talk I will address these problems, as well as answer the question which capabilities machines would need in order to exhibit human creativity. Finally, I will argue that we focus too much on copying human creativity and intelligence in machines and propose a more realistic, productive and creative alternative.