Growing a Mind in a Machine 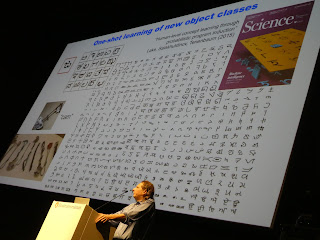 A man with a stack of papers in his hands walks towards a closed cupboard. In the corner of the room, an 18-month-old boy is watching the scene from a corner of the room. The man bumps to the cupboard, takes a few steps back, tries again, and bumps against the closed doors a second time. The little boy leaves the corner, walks to the cupboard, and opens both cupboard doors; then he looks up to the man, who again walks towards the cupboard. As the boy gazes at the bookshelves, the man places the stack of papers on one of the shelves.

The video described above, titled "Experiments with altruism in children and chimps," was created during a psychological experiment by Massachusetts Institute of Technology (MIT) cognitive scientist and artificial intelligence researcher Josh Tenenbaum. He showed the video during his invited talk on "Building Machines that Learn and Think Like People" at IJCAI2018, the 27th International Joint Conference on Artificial Intelligence, held in Stockholm, Sweden, in July.

In commenting on the video, Tenenbaum said, "The little boy sees an action that he has never seen before. He can understand what's going on and interact. Think about the common sense going on in this kid's head in order to do this. If we could build robots that can do this, that would be incredible. This is still far away, but that's our aim."

Back in the early 1950s, Tenenbaum notes, computer pioneer Alan Turing thought the learning process of young children is like filling the pages of a notebook consisting of mainly blank sheets. "From developmental psychology, we now know that this idea is completely wrong," said Tenenbaum. "The starting state is much more sophisticated than we might have thought, and the learning processes are also much more sophisticated. Apart from supervised learning and reinforcement learning, which we also use in AI (artificial intelligence), children have other powerful learning mechanisms."

Read the full article on the website of the ACM.
Posted by Bennie Mols at 5:13 PM