Can future discoveries be made by artificial intelligence? 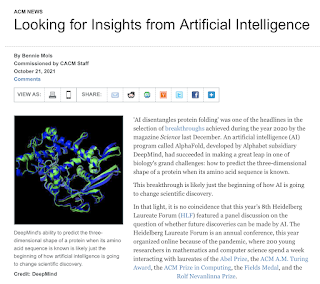 This story I wrote for ACM News and was published on October 21, 2021
'AI disentangles protein folding' was one of the headlines in the selection of breakthroughs achieved during the year 2020 by the magazine Science last December. An artificial intelligence (AI) program called AlphaFold, developed by Alphabet subsidiary DeepMind, had succeeded in making a great leap in one of biology's grand challenges: how to predict the three-dimensional shape of a protein when its amino acid sequence is known.

This breakthrough is likely just the beginning of how AI is going to change scientific discovery.

In that light, it is no coincidence that this year's 8th Heidelberg Laureate Forum (HLF) featured a panel discussion on the question of whether future discoveries can be made by AI. The Heidelberg Laureate Forum is an annual conference, this year organized online because of the pandemic, where 200 young researchers in mathematics and computer science spend a week interacting with laureates of the Abel Prize, the ACM A.M. Turing Award, the ACM Prize in Computing, the Fields Medal, and the Rolf Nevanlinna Prize.

In September, on the last day of this year's HLF, moderator and science journalist Volker Stollorz discussed the topic of using AI for scientific discovery with three scientists: Harry Collins, a professor of Social Science at Cardiff University (U.K.); Jeffrey A. Dean, senior fellow at Google Research (U.S.) and recipient, with Sanjay Ghemawat, of the ACM Prize in Computing for 2012, and Dafna Shahaf, associate professor of data science in the Department of Computer Science and Engineering at Hebrew University of Jerusalem (Israel).
Read the full story on the website of the ACM.
Posted by Bennie Mols at 7:18 PM