In addition to my article on the Human Brain Project in NRC Handelsblad from today (in which I have interviewed project leader Henry Markram), here are some more photo's and movies of simulated neurons and neural networks. (Thanks to EPFL's Blue Brain Project, which preceded the Human Brain Project.)
The Human Brain Project is one of the six selected European Flagship Projects. By the end of 2012 two will be chosen. Both will receive 100 million euro per year during the ten year period 2013-2023. The Human Brain Project wants to build a facility that can simulate the human brain (100 billion neurons) up to cellular level. This should throw new light on both the healthy brain and on neurological disorders and illnesses.
“There is no fundamental obstacle to modelling the brain and it is therefore likely that we will have detailed models of mammalian brains, including that of man, in the near future. Even if overestimated by a decade or two, this is still just a ‘blink of an eye’ in relation to the evolution of human civilization.” - Henry Markram (Nature Reviews Neuroscience, 2006) 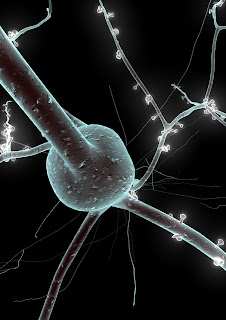 Computer simulation of 10.000 neurons in a neocortical column (0,00001% of a human brain). The neurons are simulated up to cellular level. © Blue Brain Project/EPFL

Computer simulation of 10.000 neurons in a neocortical column (0,00001% of a human brain). The neurons are simulated up to cellular level.
© Blue Brain Project/EPFL

“Looking at the same neuron, physicists and engineers tend to see the simplicity whereas biologists tend to see the complexity. The problem with simplified models is that they may be throwing away the baby with the bathwater. The problem with biophysical models is that the number of details is nearly infinite and much of it is unknown. How much brain function is lost by using simplified neurons and circuits?...At best these simulations [of the whole human brain] will resemble a baby brain, or perhaps a psychotic one. There is much more to a human brain than the sum of its parts.” - Terry Sejnowski in Scientific American (27 april 2010)
Posted by Bennie Mols at 11:24 AM