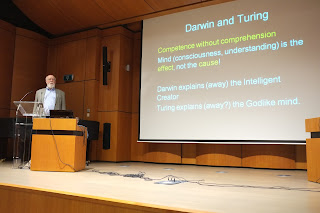 Philosopher Daniel Dennett gave a lecture about his two favourite scientists: Charles Darwin and Alan Turing at the conference Turing in Context in Brussels, October 10, 2012.

"Consciousness, free will and evolution form a trio."

"Of course we have free will. We can be autonomous and material at the same time."

"Darwin’s theory of evolution by natural selection unifies the world of physics with the world of meaning and purpose by proposing a deeply counterintuitive 'inversion of reasoning’ (according to a 19th century critic): ‘‘to make a perfect and beautiful machine, it is not requisite to know how to make it’’. Turing proposed a similar inversion: to be a perfect and beautiful computing machine, it is not requisite to know what arithmetic is. Together, these ideas help to explain how we human intelligences came to be able to discern the reasons for all of the adaptations of life, including our own."

Listen here to his lecture: .

Dennett even borrowed an example that I had used just before in my own lecture 'From Turing's Test to Turing's Tango': the human brain has a power consumption of 20 Watt, whereas supercomputer Watson, which beat the two best human players in the Jeopardy-quiz (2011), consumes 6 MW. That's 300.000 times as much as the human brain.
Posted by Bennie Mols at 9:05 PM