Media organisations worldwide show a growing awareness and adoption of artificial intelligence for information gathering, storytelling and news distribution. Given the potential transformative power of AI in journalism, media organisations must consider how best to use AI tools to fulfill their mission. They should reflect on the impacts that AI in journalism has on democracy, diversity and public values. 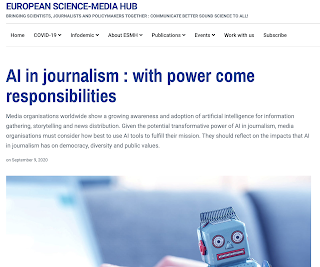 This article was published on September 9, 2020 by the European Science Media Hub (ESMH)
In its December 2019 issue, The Economist published an interview with a piece of artificial intelligence (AI), called GPT-2. GPT-2 was trained to generate text and in the interview it answered questions about the state of the world in 2020. On the question ‘What is the future of AI?’ the bot replied: “It would be good if we used the technology more responsibly. In other words, we should treat it like a utility, like a tool. We should put as much effort into developing the technology as necessary, rather than worrying that it’s going to harm us and destroy our lives.”

GPT-2 does not really understand what it says, and although its answers in the interview are a bit vague and general, its performance is still pretty impressive. Earlier this year, OpenAI, the developer of GPT-2 already introduced its successor GPT-3, which is a lot more powerful. Automatic text generation is one of many examples that show the potential power of AI used by the media.

In June 2019 the European Science-Media Hub (ESMH) already published an article on AI in journalism, following a three-day summer school for young journalists and students in Strasbourg on that topic. What have been the most important developments and discussions since then?
Read the whole article on the website of the ESMH.
Posted by Bennie Mols at 9:02 PM