This article was published online by ACM News on August 12, 2020 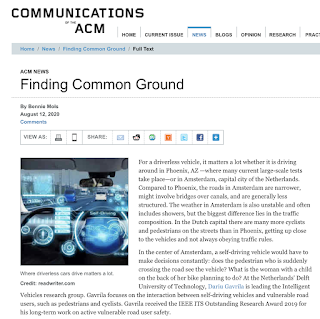 For a driverless vehicle, it matters a lot whether it is driving around in Phoenix, AZ —where many current large-scale tests take place—or in Amsterdam, capital city of the Netherlands. Compared to Phoenix, the roads in Amsterdam are narrower, might involve bridges over canals, and are generally less structured. The weather in Amsterdam is also unstable and often includes showers, but the biggest difference lies in the traffic composition. In the Dutch capital there are many more cyclists and pedestrians on the streets than in Phoenix, getting up close to the vehicles and not always obeying traffic rules.

In the center of Amsterdam, a self-driving vehicle would have to make decisions constantly: does the pedestrian who is suddenly crossing the road see the vehicle? What is the woman with a child on the back of her bike planning to do? At the Netherlands' Delft University of Technology, Dariu Gavrila is leading the Intelligent Vehicles research group. Gavrila focuses on the interaction between self-driving vehicles and vulnerable road users, such as pedestrians and cyclists. Gavrila received the IEEE ITS Outstanding Research Award 2019 for his long-term work on active vulnerable road user safety.
Read the whole story on the website of ACM News
Posted by Bennie Mols at 8:57 PM